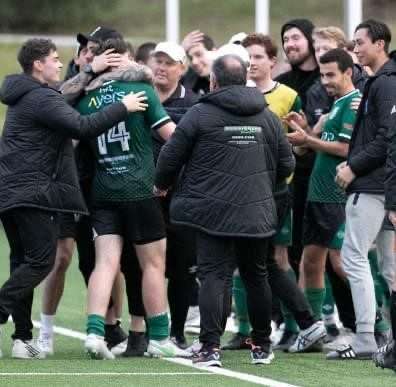 The AL1s kicked off their second game in three days against local rivals Wakehurst as part of the long weekend double-header.

The first-placed Ressies started the day’s proceedings against a more than capable Tigers outfit who were sitting in third place.

The pre match talk from coach Paul O’Shaughnessy was centred around adapting to an opponent known for their high press and hard running, and that our two-touch passing was crucial in shutting them down.

But it took the first 15 minutes for the boys to shake off their heavy legs from the short turnaround, as Wakehurst’s high press was causing problems. After a few shots towards goal, the boys finally got the wake up call and introduced their direct style of play.

And with the flick of a switch, the Ressies were on top; dominating possession, stringing passes together and beginning to ask their own questions of the opposing keeper.

The boys soon capitalised on the pressure when Captain Pat Ewing went down in the Wakehurst box which the ref deemed a penalty. Youngster Danilo “Danzo” Tomic immediately put his hand up for the job, eager to get the monkey off his back from a miss earlier in the season. Although history would not be repeating itself this time, as Danzo fired his shot into the top corner to put Forry in the lead.

The boys continued their free flowing football with some great link up play between midfielders Massimo Vescio, Luke Rogers and Pat Ewing, creating gaps for our forwards against what was a very narrow Wakehurst defence.

They would soon learn allowing Danzo even an inch of space down the wing is like playing with fire, as he blitzed through the backline inside the box and attempted a shot across goal which led to a disaster class between the keeper and his centre back who fumbled the ball between each other before sending it into their own net.

Relatively unphased, the Tigers continued their hard running and maintained efforts to breach the Forry backline with long balls over the top. The unrelenting pressure led to a loss of possession at the back, and in what one moment seemed like a golden opportunity for Wakehurst, the boys in green rushed goal-side of the attack and quickly put out the flames, with Ewing adding another assist to his belt after a long-ball to striker Sam Thomas, whose perfectly-weighted first touch left the keeper in no-man’s-land and slotted it in the bottom right corner. Forry 3-0.

The strong first half performance was then topped off by Danzo the free kick specialist, who stashed the ball away into the top right corner from about 20 yards.

The match would prove to be a game of two halves, however. The Ressies lacked all the hunger and desire they developed throughout the first half, allowing Wakehurst to play their game through the centre of the park.

The boys weren’t marking tight and struggled to get the ball out of their own half. It was only a matter of time when Wakehurst stole Forry’s hopes of a clean sheet as they slotted home a free kick from the edge of the box to make it 4-1.

Although Forry still couldn’t find their first-half form, they were able to preserve the three goal lead for the remainder of the match until Danzo capitalised on some rare possession down Wakehurst’s end and netted a cheeky long-distance outside the foot shot into the side netting.

Not a bad way to spend a Monday afternoon, 5-1 FT.

Man of the Match – Danilo Tomic

First Grade took to the field after watching reserves put on yet another clinic in the Grand Final rematch from last season and were determined to make it a 6-point public holiday.

The first half was physical, and after two games in three days there was bound to be fatigue on both sides. Both teams traded chances in the opening 20 minutes, but it wasn’t until a long throw-in from Alex Bain was knocked down by James Silvas into the path of Harry Brooke who had made a back post run and calmly slotted the ball home from six yards to get his first goal of the season. 1-0. Forest continued to control the game until a lapse in concentration just before half time allowed Wakehurst back into the game, leveling the scores at half time 1-1.

After some motivation from Shauny at half time along with the introduction of pace, Forest came out of the change room determined to regain the lead and created countless chances without finding the back of the net. However, with patient possession play, Forest were in control and found the net halfway through the second half. An uncharacteristic long ball from beyond halfway by Harry Brooke was inch-perfectly measured finding Hayden Waters at the back post who comfortably tapped the ball past the keeper who didn’t even flinch. 2-1 Forest. The game looked set to be controlled by Forest until a quick freekick from Wakehurst resulted in a one on one, with Rocco unfortunately taking the player giving Wakehurst a penalty and 2-2 with 15 minutes to play.

Both teams created chances with whatever energy they had left after 180 minutes of football over three days, but deep into injury time a Wakehurst attack was smothered by a brutal tackle from Luke Sheepway, sending the ball into Forest’s attacking half. The attempted clearance was intercepted by Hayden, who sent the ball wide to James Silvas who then proceeded to make a mockery of the Wakehurst defence, skinning players and finishing past a helpless keeper from a tight angle to put Forest up 3-2 with a celebration worthy of the occasion. After some exquisite time wasting from the boys, Forest sealed a 3-2 victory, recording three straight wins for the first time this season.

Man of the Match – Harry Brooke